What gets measured gets managed.

I saw that quote for the first time in The Four Hour Workweek and it stuck with me ever since. The app I’m looking at right now is called Reporter, and I use it to measure. The management—I’m hoping—will come later.

Have you heard of Nicholas Felton? He’s a designer; and one of the reasons he’s well-regarded is his collection of Annual Reports. He meticulously collects information about his life throughout the year, and at the end he compiles it into a gorgeous book. It’s filled with graphs, charts and all kinds of great visualizations of his past year on Earth. He has charted everything from his coffee consumption to the people he spends most time with, to sleep, travel, location, to type of bird eaten. Meticulous and fastidious. A few years ago, he released an app/website called Daytum which was a way to collect this data and chart it. I used it for a while, but it wasnt’t very smooth and it never stuck. Reporter is the latest incarnation of his data gathering process, and it reflects a new approach to the problem of collecting this information.

Daytum was great for tracking progress and accumulation. Beers consumed, movies watched, weight, etc. Reporter is for tracking state. The app asks you a set of questions at a semi-random interval throughout the day. You set up the questions in advance (or use the built-in questions) and quickly answer them a few times a day. By randomizing the interval, the app tries to collect an unbiased view of your life. The app is beautiful and well designed which makes the whole process totally painless.

This is a bit reminiscent of Quantified Self but with a different twist. QS focuses on physical stats like weight, sleep time, running performance, etc. Reporter leans onto ongoing state like current mood, location, surrounding people, etc. I feel like it’s trying to peer into what my day-to-day really looks like. It collects the kind of information that automatic trackers like FitBit can never know, and so complements them perfectly.

Why would I want to do all of this? Firstly, because I think gathering data about yourself is neat and I’d love to put together a year-in-review report at the end of it. That alone makes it worthwhile to me. Secondly, I’m wondering if I can learn anything about my life. Two weeks into it I saw that aside from “full” and “hungry” my most common states are “sleepy” and “agitated”. With a little work I can probably learn all kinds of things. Thirdly, I’m wondering if being aware of what I’m doing will be helpful, the way keeping a food journal helps people eat better. 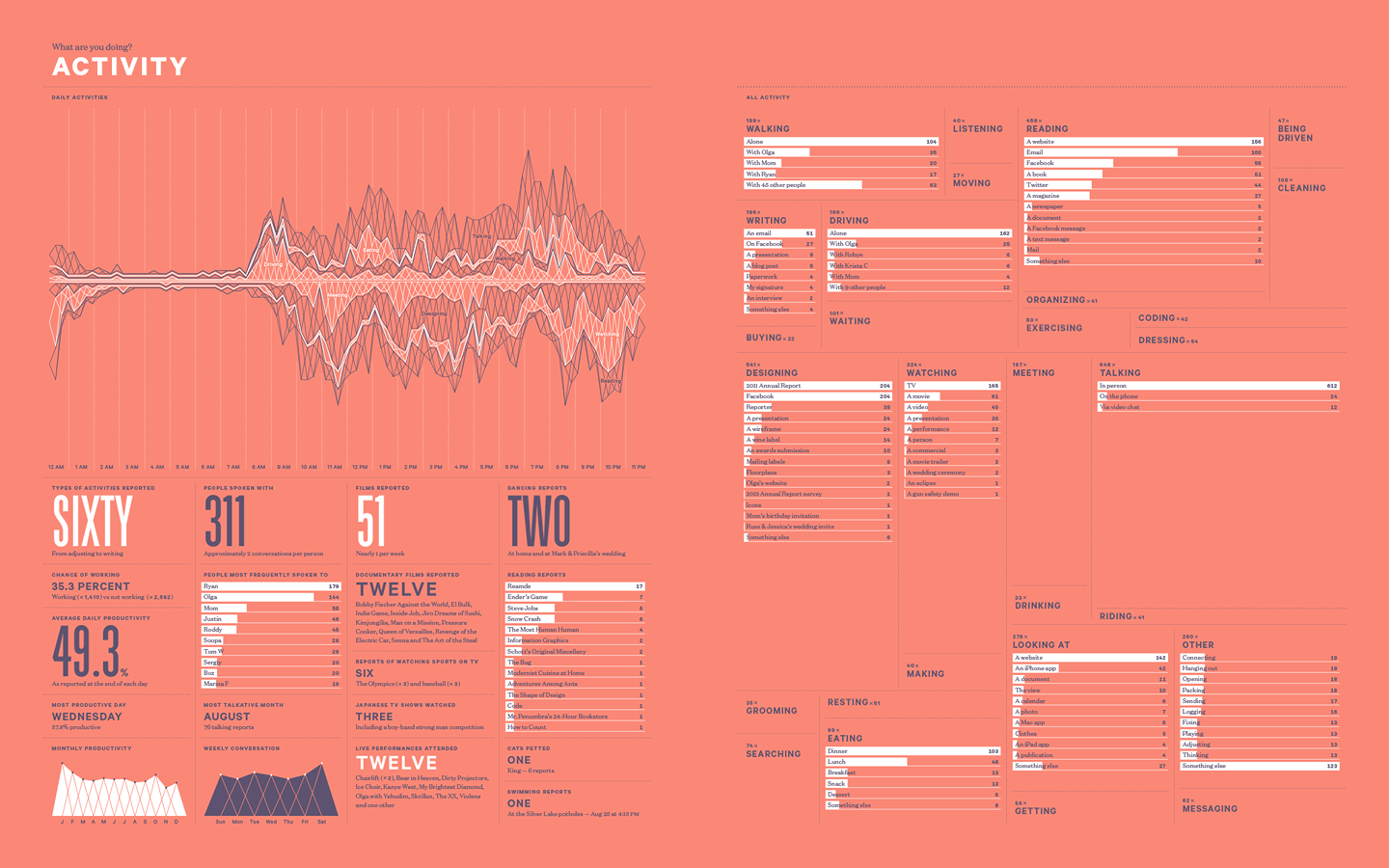 A picture from the Feltron 2012 report

So, having concerned myself with using the app effectively, what do I need to do? The steps are:

Garbage-in garbage-out applies, so choosing the right questions is the most important thing. Having the right data will mean getting the right information later. Trying to figure out what I want to know was too complicated, so I just started with the built-in questions and expanded them when one of the following happened:

For example, “How are you feeling?” was too general, and I split it into “What is your physical state” and “What is your mental state?” Then I became curious about the food I’m eating and how it relates to my health, so I added “What are you consuming?” and continued in that fashion. Here are my current questions:

So, I’m hoping for some more awareness of what my mood really is, how I feel most of the time, and where my time goes. I also get some freebies: for example by pressing the awake/asleep toggle I’ll get my sleep times. The app also tracks the weather and can track things like ambient noise, number of photos taken, etc.

Having done that, I just had to answer the questions and pay attention to the quality of the answers. For me, this meant being very specific. For the “feeling” question I have answers like “piqued”, “lucid”, “srs”, etc. The more the better, and the easier the analysis later (once correlated with other questions). Some specific advice:

Next up is the frequency. I recommend setting it to 6 and then increasing gradually. My rule of thumb is to never manually add reports, because that would defeat the purpose of random sampling. When I feel that the app is missing information by not asking often enough I crank it. When it becomes too annoying I turn it down. I found 14 to be a good number for me.

Lastly, I had to build the habit. This means always reporting as soon as the app asks for it, and the second is remembering to set sleep mode on and off. That second one is hard. I don’t have any good advice here.

As I said, Reporter complements physical trackers really well, but there’s a third category of data I’d love to keep. At the end of a year I’d love to know all the books I read, movies I watched, and other one-off statistics. Tracking all of these things with Reporter would mean answering 20 questions every time, and leaving most of them blank. I’d love to be able to type in ad-hoc answers that don’t ask me about state but about some milestone. This was the job of Daytum, but as I said before the app itself needed work. I would love (and gladly pay for) a Daytum-like functionality in Reporter (or an updated Daytum).

It’s been a great experiment so far, and I’m eager to clean out all the beginner cruft at the start of March to start tracking in earnest.